Knees Caving in on Squats?

All weight lifters have experienced it and most of us believe it’s a sign of bad form… but how do you stop your knees caving in on squats?

A common problem for weight training enthusiasts is that of caving knees when performing squats. Whatever wording is used to describe knee caving – including terms such as valgus collapse and medial knee displacement – when t 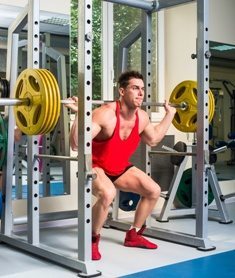 he knees collapse inwards under strain it can be a painful experience, and lead to future health issues. Fortunately, there are ways personal trainers can help to combat the problem of knees caving in.

Is caving in a natural mechanism?

Beginner’ knees tend to cave inward when practicing squats because the natural movement of the hips and thigh muscles cause inward rotation during the squat movement. It takes training to correct this natural reflex movement, though watching experienced squatters might cause some confusion. Some of the world’s best squatters appear to cave in at the bottom of the squat cycle. In truth though, this is more of a controlled ‘twitch’ with a rapid reversion to knees out.

Caving always happens on the upward drive of a squat. There are possibilities that morphology of the knees (medial condyles) and ankles, and femoral rotation, plays its part in the process of caving in. However, caving in usually happens with heavier loads, so it is more likely that the reaction is muscular. Ankle dorsiflexors may play a part, but most likely are the adductors, which may pull the hips inwards during the squat and cause knee rotation and caving, particularly where there is relative weakness to abductors. The squatter shouldn’t forget the interaction of quadriceps and hamstrings, either.

How to prevent caving in

The seriousness of knees caving in really depends upon why and how they cave in. Elite athletes seem to have no problems, but this is because they control the cave in. It is this control which answers the problem. Recognise that it is going to happen, and take action to control the cave in. By doing so the squat becomes safer and more concentrated on achieving its aims.

Control requires the squatter to understand why the caving in is taking place. If it’s a joint problem, for example, there is little that can be done except for concentrating on form and working on strengthening muscle groups that support the joints. Personal trainers should work with their clients in discovering the cause of the cave in, helping to perfect the squat technique, and target hip abduction to correct muscular imbalances.

Kira’s top tips for a long-lasting career in health and fitness
November 17, 2018

What Social Media Platform Is Best Suited For Your PT Business?
June 11, 2018

Job Opportunity at Listen to your Body – Coomera East
April 6, 2018

The 23 Habits EVERY Financially Successful Personal Trainer Has
May 6, 2015